HomeAre We Experiencing a Globalization Revolution or Technological Monopoly? 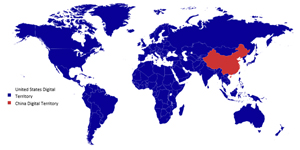 Are We Experiencing a Globalization Revolution or Technological Monopoly?

Throughout the past 40 years, nations have witnessed an extraordinary development of technologies and how rapidly the world has advanced. It seems that a new invention is being announced everyday across virtually all industries, due in part to an unprecedented accessibility to technology. Thanks to an incredible access to technology, people are able to explore and invent more easily than ever before. Most countries experiencing this innovation fall into one of three categories: advancing technology and sharing it with the rest of the world, advancing technology and keeping it for their nations, and lastly countries who are not playing a role in enhancing or advancing current technologies, which are mostly the second world countries and a majority of third world countries.

The idea behind this article is not to rate companies by their size or number of employees but to expose the global influence and impact of a few companies and the power that their governments enjoy from their achievements and growth. The largest corporations or firms are certainly based in either the U.S. or China. One might argue that China must have the largest corporations in the world due to having the largest population, but this argument does not hold up when we examine India, which has a similar population but no international footprint in any industry.

Companies within the United States frequently try to be the first to develop new technology, platforms, or electronics-based business models. Most of the world trusts and welcomes these new offerings, except China and some other second world countries who do not agree with the United States’ foreign policies and acts. A core difference between China and other countries that deny U.S. technologies is that China can develop the same or similar technologies for itself, whereas these other countries simply experience the disadvantage of blocking these technologies through a lack of communication, networking, and trade.

The United States can effectively wage war in many ways such as economically, technologically or by proxy. We are currently seeing the effect of the latest technological and economic campaign being waged against Huawei. After President Trump banned the company from entering the U.S. market due to privacy concerns, many major U.S. technology firms terminated their business arrangements with the Chinese telecommunications firm.

During the past 20 years, the smartphone industry has witnessed multiple companies who came to the market very strong and then faded out due to lacking a competitive advantage in quality, features, pricing, or some mix of the three. There is a strong chance that Huawei will be the latest to fade and, if the ban does not get lifted, leave the market for the two largest players in smartphone industry: Apple and Samsung. This demonstrates the amount of economic influence and control the United States holds through its footprint in virtually every industry. International conventional wisdom has grown accustomed to the United States banning imports and exports to and from certain countries as punishment for breaking international policies; the world is not used to digital or technological war, both of which will likely become commonplace when reviewing their effectiveness against Huawei.

It can appear to the public that companies within the U.S. compete intensely; however, when the matter is against national interest, everyone simultaneously turns their attention to eliminate the foreign threat, whether company or government. Traditionally there have been three kinds of borders: air, land, and sea. In this new world of globalization, a fourth, digital, border has emerged. This virtual border is astonishingly flexible and can adapt as quickly as public opinion. In the coming articles I will focus on one industry at a time to support my future vision and understanding of how the world is running and will be run under the United States’ supervision.